Here’s a fairly common question that I get:

Why don’t you delete {insert post}? It’s so offensive!

Well, sure, maybe it’s offensive, but maybe that’s how I feel. Maybe I feel that people on the other side of that topic are the offensive ones. Did you ever think of it that way?

Most often, this question comes from my family or friends.  Usually it’s about a specific post from 2009 where I rant and rave about my mom and sister.  I also say some very cruel things about her being knocked-up.  Before I go any further: I stand by what I said.  I meant every word of it and I will not take it back, delete it, or apologize for it.

Anna and I have a good bit in common when it comes to the circumstances of our conception and birth.  There are plenty of differences, too.  Such as her biological parents got married after they got pregnant again.  My mom was smart enough not to try to stick with my biological father.  (Thank you, mom, I’m certain that you saved us both from years of misery.)  She married my adoptive dad and they’re living happily ever after — still having sex, too, if you believe their creepy jokes.  *shudder*

Anyways, I got a little off-topic there.

When someone asks me to delete an entry, what I really here is:

Can you lie about this topic for me?  I would really appreciate it.

My answer to this is always, “no.”  Sometimes there’s an argument that follows.  Sometimes not.  My answer doesn’t change.

I mean really, let’s think about this.  If you tried to delete everything from your past just because it bothered someone, what would you have left?

Religion?  Aaahahahahaha!!!!!  Hell no!  Every religion offends someone else.  Every single one.  No exceptions.  So, assuming that you’re an average person, you were raised to believe something.  Odds are, your religion has molded you in some way.  Delete your religion.  Would you still be the same person?  Probably not.  I’m an Atheist and I’m still glad to have been raised Catholic because it had a lot to do with how I turned out.  If you were to delete my religious past from my life then I wouldn’t be who I am today.

My sister and I don’t always get along.  We have a lot of differences and she really isn’t the type of person I would choose for a friend.  That being said, she is my sister and I can’t just cut her out of my life.  I wouldn’t want to, honestly.  She’s also a part of who I am and even though I completely disapprove of her getting knocked up twice before getting married, I love the two kids she produced.  Well, Chase is still growing on me.  Anna, though, I like her; I like her a lot!  In fact, she’s one of my favorite people under the age of five!  I might be willing to go so far as to say that I love her, even!  :-p

So why won’t you delete {topic} if you feel differently about it now?

Haven’t you been paying attention?  To delete my past thoughts would be akin to lying!

–Walt Whitman, “Song of Myself”

People can change their minds about things.  People can see more than one point of view.  People can blame one person for doing something wrong without hating the results of that mistake.

Anyways, hopefully this will explain why I refuse to delete things from my site. 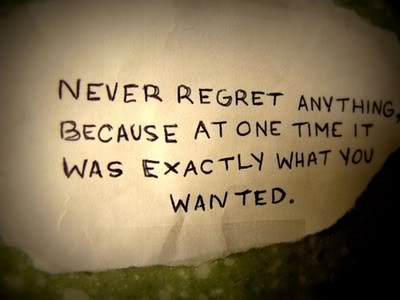 Also, please remember that just because my thoughts change on something doesn’t mean that I’m going to try to hide my past thoughts.  Asking me to hide those past thoughts won’t change my decision and will only make me think less of you.

Where are you going?